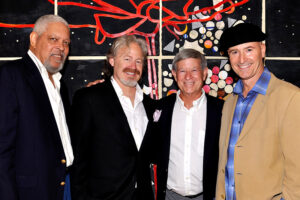 Pianist Richard Sherman and Grammy Award winning vocalist Bili Redd have been playing music together for over seven years. In addition to local nightclubs in the South Bay, they have also performed in eight benefit concerts. The trio includes bassist Adam Cohen and drummer Jon Stuart. They have been performing at the fabulous Terranea Resort in Palos Verdes Estates for the last three years and draw standing room only crowds on a consistent basis.

Bili has said this is the best trio he has had behind him in his musical career. The audience can feel the love the musicians have for the music in addition to the love they have for each other.

Their new CD Sing is currently being played on the internet jazz station KEBNRADIO.com. Click here to listen to cuts from Sing.

BILI REDD THEDFORD is the phenomenal premier vocalist who stirs you to rise from your status quo and soar in melodic wanderings of all sorts. His voice brings the wealth of the intuition of the ‘art of music’. His ‘gift of song’ is not to be taken lightly and you won’t be able to take it for granted. He demands, with a precedent, every part of you that can love a song. ...continued

ADAM COHEN In a city where excellence and versatility are the benchmarks for any working bassist worth the gear in his gig bag, Adam has carved out a healthy piece of the pie. On any given night in Los Angeles, Adam can be found on stage lending his solid and creative support to an array of artists covering a broad range of stylistic demands. His sensitive accompaniment and lyrical soloing has, in addition to making him a favorite among many artists and composers, put him in the spotlight as leader of his own band.
…continued