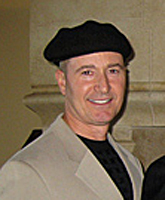 JON STUART is originally from Chicago. He came from a musical family of six children where he began playing drums at the age of five. He accompanied his father, who played piano, while he learned to play brushes before sticks. “I just remember that brushes were quieter and I could hear better since I only had a metal serving tray to play on.” He quickly learned to play with sticks when his dad promised the family that who ever learned to play a roll first could have the bike he had just bought. “All I remember is riding that thing later that day.” While still in elementary school, he began taking lessons from the local teacher who set up an audition for a Jr. High school jazz band (7th & 8th graders) at another school; because there was no real music program at his grade school. He used to take his lessons playing on a wooden bench. “I recall going to the other school for the audition and being with 8-10 kids who were 2-3 years older and all owned drum sets. I remember being really nervous never having sat behind a set of drums let alone played with a real band. So the first time I ever played a drum set was at that audition where I got the gig and everyone hated me.“

Jon eventually joined the Percussion Ensemble at Oakton Community College, studied privately with Jake Jerger where he learned to play most of the percussion instruments. He performed with Dave Samuels (Spyro Gyra,) Ed Thigpen, and Louis Bellson with whom he became friends and performed several times. One such gig was in St. Louis, playing with “The Big Band Machine” which featured Mr. Bellson and Jon, where he received a standing ovation for battling with the master and holding his own.

Jon studied at DePaul School of Music for an undergraduate degree in performance as well as at Columbia College, performing with The Chicago Jazz Ensemble (Bill Russo) for 2 years.

He also was the principal percussionist for The North Shore Symphony for 2 years. He moved to Los Angeles in 1995 where he remains busy playing various live performances and club dates.