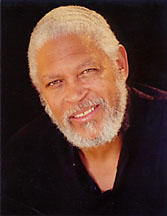 BILI REDD THEDFORD is the phenomenal premier vocalist who stirs you to rise from your status quo and soar in melodic wanderings of all sorts. His voice brings the wealth of the intuition of the ‘art of music’. His ‘gift of song’ is not to be taken lightly and you won’t be able to take it for granted. He demands, with a precedent, every part of you that can love a song.

Accomplished as music arranger-composer, lyricist, percussionist, bassist, and overall – a ‘musician’s musician’, his humility lends a gentle strength of sensuality to his vocal performance. His credits include, working with and accompanying George Benson, Randy Crawford, Andre’ Crouch, Quincy Jones, Billy Higgins, Jeromy Lubbock, Melissa Manchester, Minnie Ripperton, and Sarah Vaughan – and the list goes on. Although this artist is not given to the boasting of his credits, his 6 Grammy nominations – 1 with Jessie Jackson, 2 his personally, and 3 with Andre’ Crouch, resulting in the winning of 3 Grammy’s, he’ll fondly concede to his having been admitted to the Gospel Music Hall of Fame in 1996.

In addition to Bili’s artistic accomplishments, he maintains a practical face to his work, -in studio for six years as vocalist and vocal contractor concurrently running with twenty-five years of record producing. His experiences run the gamut of road musician, doing voice-overs, modeling, and more, have made him a familiar figure in Los Angeles recording studios, camera lenses and the arts community. This multi-talented local icon is not a stranger to entertainment’s professional world, evidenced by his presence in places like, Warner’s Recording Studios, United Artists, the Record Factory, Capitol, RCA, Atlantic, active production director at National General Studios and his own Middle Passage Productions.

With all of Bili’s heady accomplishments he, remaining humble and at the same time passionate in his involvement with Leimert Park’s World Stage Performance Gallery, contributes his talents to some of the city’s most important spoken word performers.

This artist’s bold and impressive resume is not limited to local appreciation. He’s been celebrated during live recorded performances at Carnegie Hall in New York, Usher Hall in Edinburgh, Scotland, featured vocalist at the opening of the Sydney Opera House in Sydney, Australia, also during lauded performances at the Queen Elizabeth Opera Houses across Canada, and has performed for foreign dignitaries across the Orient and numerous places across the globe – too many to name here – including the Queen of England and the Prime Minister of Australia.

As a native born Los Angeles resident, he brings explosive joy to any musical production and provides the timing anchor to any musical project he is associated with. With forty-plus years of singing and extraordinary musicianship, Bili Redd Thedford embodies the incomparable multi-talent pulsing in a city that boasts an immeasurable number of names and unmatched quality in entertainment throughout the world. Bili’s consistently distinguished and moving performances are not to be missed. He is a treasure in the music world and performs with the freedom of creativity that embraces his audiences and leaves you wanting nothing but, more.