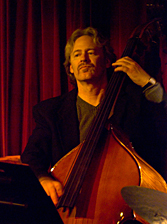 In a city where excellence and versatility are the benchmarks for any working bassist worth the gear in his gig bag, ADAM COHEN has carved out a healthy piece of the pie. On any given night in Los Angeles, Adam can be found on stage lending his solid and creative support to an array of artists covering a broad range of stylistic demands. His sensitive accompaniment and lyrical soloing has, in addition to making him a favorite among many artists and composers, put him in the spotlight as leader of his own band.